As I wrote on CFO.com on Tuesday, China’s domestic banks may face problems during the “great moderation” of China’s economic growth.  A recent S&P report said that the majority of China’s top banks, and many regional and national banks, “remain vulnerable to credit shocks stemming from a hard-landing scenario for the Chinese economy.” They are not as healthy as they seem, according to this Economist piece: “The credit binge of recent years has left them with far higher levels of risky loans than they acknowledge.” 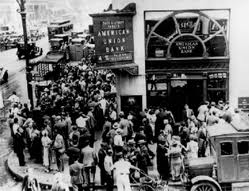 Will Chinese and Indian depositors get spooked?

A lot of that credit binge was commercial loans — in particular, as I wrote yesterday, “Chinese banks also have heavy balance-sheet exposure to local government financing platforms (LGPFs) — risky state-owned enterprises established to finance infrastructure construction and urban development. They were in part set up to circumvent rules that prohibit local governments from borrowing. As much as 20 percent of the Chinese banking system’s total credit exposure (RMB 15 trillion, or $2.5 trillion) is in this sector, according to S&P.” The problem with that is the slowing Chinese economy may hit some of those borrowers hard, particularly the exporters.

India’s situation, at least currently, seems worse. Slowing economic growth is being compounded by a rapid depreciation of the rupee, which the FT says today threatens “to worsen asset quality and reduce demand for bank credit from large industrial companies.” The balance sheets of India’s banks are already bad — with nonperforming and restructured loans at about 9%, says the FT, quoting Morgan Stanley. That number could rise to 15.5 percent over the next two years.

There are a lot of moving parts here. Monetary policy in both countries will be key. It will be up to the Reserve Bank of India and China’s central government to figure out how to avoid toppling the banks. After all, in both nations the government play a huge role in the banking sector, a role that distorts free-market forces and has incentivized banks to make unwise underwriting decisions. It surely seems like the next banking crisis will come from both or one of these countries — and they may be contained or have global ramifications. Although 2008 seems not far away, we are about due for a crisis anyway.