Wouldn’t it be great to get 10% on a corporate bond again? Then again, the inflation rate was 11%. This post is really just an excuse to use Datawrapper. Here’s the interactive version. 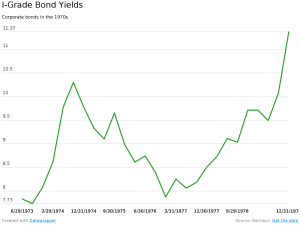 A bank is hiding inside your supply chain

My latest story on CFO.com:

Check out a great column on convertible bonds from an exec at Aequitas Advisors.

As I wrote on CFO.com last week, LBO dealmakers have access to cheap debt. New proof of that came out today. According to Reuters, KKR got the cheapest borrowing rates ever for a leveraged buyout.  For the acquisition of Gardner Denver KKR is borrowing $2.4 billion in loans and $575 million in bonds. The blended average interest rate is 4.8 percent! KKR also arranged a $400 million revolver. The financing was rated single “B.” That’s junk territory, folks.

The interest rate was only this big.

(A side note: the loan syndicated banker quoted in the piece calls KKR a “best-in-class” financial sponsor. He must not be following the demise of payments company First Data, which KKR has rode into the ground.)

Yep, you guessed it, the federal government. The Financial Times reported today that Freddie Mac will sell a new kind of derivative that will get private investors to take on the risk of default of $22.5 billion in mortgages. From the story:

Freddie is selling a new financial product it calls structured agency credit risk, or Stacrs, pronounced “stackers”, which will absorb some of the losses on a pool of government-guaranteed mortgages that it currently holds in its portfolio.

And investors will apparently be gobbling it up. And why not. The riskiest tranche pays a yield of 715 basis points above interbank lending rates, says the FT. 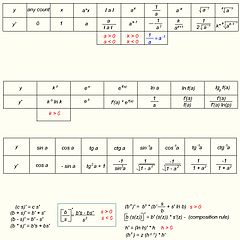 A little math and the risk goes away.

It’s actually a very good piece of financial engineering to move the risk off the federal government’s books. But let’s all remember this the next time some banking regulator cries that it was derivatives that sank the financial markets five years ago.

Another kind of contagion

Prior to the financial crisis, you may recall, most of the risk management talk in the banking industry was about protecting against a bird flu virus pandemic. While the mortgage-backed securities market was turning into a toxic wasteland, global regulatory agencies were more concerned about whether banks could function if everyone called in sick. This kind of stress test was forgotten about for six years, obviously, while the global financial system melted down.

Well, know bird fever is back, says the Financial Times. Always on top of things, reporter Tracy Alloway has a story today about it. Can banks, broker-dealers and asset managers function if 30% of their staff is wiped out by H7N9? Actually, I think they could. Didn’t they wipe out that many employees on their own after the crisis hit? 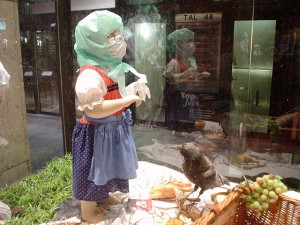 Is your banker handling birds properly?

Buffett explains how to play it safe

A margin of safety is useful when going under an overpass.

The Seeking Wisdom blog on WordPress had a great post about the concept of margin of safety. Read it here.

Among other points, he provides an excerpt of a 1984 speech on buying companies, by none other than Warren Buffett (boldface is Vembunarayanan’s).

You also have to have the knowledge to enable you to make a very general estimate about the value of the underlying businesses. But you do not cut it close. That is what Ben Graham meant by having a margin of safety. You don’t try and buy businesses worth $83 million for $80 million. You leave yourself an enormous margin. When you build a bridge, you insist it can carry 30,000pounds, but you only drive 10,000 pound trucks across it. And that same principle works in investing.

He has a more recent post on supply and demand that’s worth a read also.

Bank execs have a laugh at our expense

Listening to two Anglo Irish Bank execs joke about a 7 billion euro bailout is nauseating, but are we really surprised conversations like this went on? This recording of an internal phone conversation between the head of the bank’s capital markets area and its director of retail banking was uncovered by The Irish Independent. The good stuff starts 2 minutes into the tape. Anglo Irish was liquidated in February 2013.

The House Sticks Its Nose Into Auditor Rotation

U.S. Representatives are not merely waging a fight against auditor rotation. They are trying to marginalize the Public Company Accounting Oversight Board.